"Science fiction is a time-sensitive subject in literature. Usually futuristic, science fiction speculates about alternative ways of life made possible by technological change, and hence has sometimes been called "speculative fiction." Like fantasy, and often associated with it, science fiction envisions alternative worlds with believably consistent rules and structures, set apart somehow from the ordinary or familiar world of our time and place. Distinct from fantasy, however, science fiction reflects on technology to consider how it might transform the conditions of our existence and change what it means to be human. "Sci Fi" is the genre that considers what strange new beings we might become-what mechanical forms we might invent for our bodies, what networks and systems might nourish or tap our life energies, and what machine shells might contain our souls."
--Dr. Beshero-Bondar
Program Chair and Professor of Digital Humanities, Digital Media, Arts, and Technology
Penn State Behrend
https://pitt.libguides.com/scifi 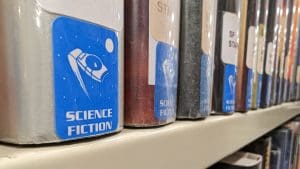 Science Fiction is a vast genre involving science and technology in the future, and can be imagined or based on real science. There can often be many crossovers within the genre of SF but these are some of the most common sub-genres:

Where the Forest Meets the Stars

A Darker Shade of Magic

The Ten Thousand Doors of January

The Girl With All the Gifts

This Is How You Lose the Time War

How many Sci-Fi sub-genres have you explored?